A tale about embracing new beginnings in a time where positivity can so often be hard to come by.

On a cold winter’s night my mood sank due to a collision of sad circumstances. As any songwriter would do, I sat alone, drowned in my thoughts and feelings, looking towards brighter days to come. After a session with guitarist George, Arcadia was written with a message of hope, positivity and openness whilst understanding that letting go is an important aspect of life.

After attending a band rehearsal session, renowned producer Tom Allom decided the best approach to recording would be ‘live’ in order to allow the band to blend naturally and organically ‘in the room’. Tom decided to record Arcadia in The Gatehouse studio at Abbey Road.

Nathan Harrison is a London based alternative alt-pop artist with music focused on escapism and humanity. A passion for storytelling and narrative creation was found through his dads collection of albums, leading to the start of his songwriting journey. From a young age Nathan and his sister would write music with stories together in their spare time.

Nathan has created his own unique vibe to contemporary music with expressive vocals, and a wide ranging sound from chilled ambient-pop to reverberating alt-rock, all with a rhythmic undercurrent that quickly hooks in listeners.

Having been captivated by the energy of performing live, Nathan has travelled widely across the UK playing a range of venues from larger concert halls and festivals, to smaller intimate clubs and pubs.

Live at the Half Moon 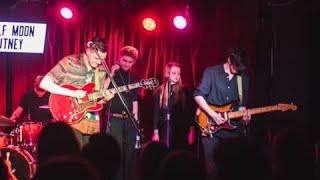